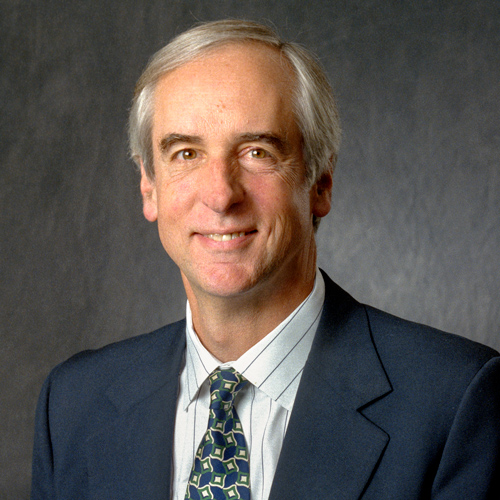 Hunter R. Rawlings III came to Ithaca as Cornell’s tenth president with a vision for, in his words, “composing Cornell”: organizing the remarkably diverse parts of Cornell in such a way that they would work more effectively together. During his presidency, the university took great strides toward making that vision a reality. Thanks largely to Rawlings’s efforts, Cornell became much more than the sum of its individually excellent parts.

Rawlings quickly gained the respect of faculty members for his support of intellectual life and academic standards. As part of his commitment to academic excellence, he promoted increasing the number of undergraduate applications for admission, lowering the university’s rate of offers of admission, and raising the yield rate on those offers. He provided strong support for continuing to increase student diversity and for Cornell’s need-blind admission policy, which was made permanent during his tenure.

Rawlings renewed Cornell’s emphasis on the importance of undergraduate teaching, setting an example by teaching an undergraduate course in the Department of Classics during the last two years of his presidency. He established the new position of vice provost for undergraduate education, and the Cornell Presidential Research Scholars Program. He also envisioned and launched the Residential Initiative, a new approach to residential life for Cornell undergraduates, resulting in the transformation of the north campus into a living and learning community for freshmen, and the scheduled construction of residential colleges on the west campus for upper-level students.

Rawlings set strategic scientific priorities for Cornell, as recommended by a faculty committee charged with identifying areas of emphasis in the life sciences and engineering. These recommended areas of emphasis comprised advanced materials science, computing and information science, and the new fields that embody the revolution in biological research and technologies, including genomics, computational biology, bioinformatics, and nanobiotechnology. In carrying out the resulting Cornell Genomics Initiative and New Life Sciences Initiative, Rawlings also reorganized the biological sciences on the Ithaca campus and set in motion the plans for constructing a pioneering facility for life science technologies.

At the same time, Rawlings provided additional support for the programs in the humanities and social sciences at Cornell, recognizing their critical significance for the future of human societies in a rapidly changing scientific and technological environment. For example, to encourage intellectual collaboration across disciplines and departments, he initiated and personally participated in a series of foundation-funded faculty seminars that focused on the social sciences and humanities.

Rawlings also strengthened Cornell’s Medical College, guiding the implementation of the Medical College’s strategic plan through a successful major gifts campaign. As a result, by 1998 Cornell’s medical complex in New York City had been redesignated the New York Weill Cornell Medical Center to reflect the operations merger of New York and Presbyterian Hospitals and the renamed Joan and Sanford I. Weill Medical College and Graduate School of Medical Sciences of Cornell University. In 2001 Rawlings signed an agreement to establish a new location of the Weill Cornell Medical College in the Middle Eastern nation of Qatar, thereby creating an unprecedented expansion of many aspects of Cornell’s international activities and influence.

Born in Norfolk, Virginia, Rawlings was a 1966 graduate of Haverford College, with honors in classics, and received his Ph.D. degree from Princeton University in 1970. His scholarly publications include a book, The Structure of Thucydides’ History (Princeton University Press, 1981). After serving as president of the University of Iowa from 1988 to 1995, Rawlings began his appointment as Cornell University’s president. A national spokesperson for higher education, he has served as chair of the Ivy Council of Presidents and of the Association of American Universities, and was a member of the American Council on Education board. He is a member of the American Academy of Arts and Sciences and serves on the board of managers of his alma mater, Haverford College, and on the National Advisory Committee of the Woodrow Wilson National Fellowship Foundation. He also serves on the boards of the National Humanities Center and the American School of Classical Studies at Athens.

At the conclusion of his presidency in 2003, Rawlings was elected president emeritus and began serving as a full-time professor in Cornell’s Departments of Classics and History.

Hunter R. Rawlings III, a member of the Cornell faculty and a president emeritus, was appointed by the Board of Trustees to serve as interim president of Cornell after Jeffrey Lehman resigned as the university’s president. Returning to the president’s office on July 1, 2005, Rawlings agreed to serve until a new president assumed the position.

Rawlings, the Board of Trustees, and the university’s other senior administrators agreed to maintain and enhance Cornell’s established academic, research, land-grant, other outreach, and international priorities and initiatives during the interim period and to maintain momentum for the upcoming capital campaign. Rawlings provided effective stewardship for all these endeavors while also providing strong leadership in new areas.

Very early in his term, he personally negotiated an end to a protracted protest against the building of a replacement parking lot on West Campus. The agreement allowed construction to proceed while also putting in place several measures designed to promote sustainability, to ensure a thorough review of campus transportation and parking needs, and to foster dialogue with the community on issues of mutual concern.

In his October 2005 State of the University Address, Rawlings focused on what he termed the serious threats to science, to rational thought, and to one of the fundamental principles of American democracy posed by recent efforts to require the teaching of “intelligent design” in science courses in America’s public schools. He urged members of the faculty, in the humanities and the social sciences as well as in scientific fields, to help shape public discourse and debate on this topic. This speech received national coverage and reaction.

Rawlings also traveled to China in November 2005, to inaugurate an academic exchange between Tsinghua University and the Cornell College of Engineering, to finalize with Peking University arrangements for the Beijing portion of Cornell’s new undergraduate major in China and Asia Pacific Studies, to cultivate opportunities for new relationships and exchange programs, and to communicate and publicize Cornell’s capabilities and commitment to using its resources and expertise for the public good.

Following the untimely death of the 13th president, Elizabeth Garrett, in March 2016, and Provost Michael Kotlikoff’s capable service as acting president, Hunter Rawlings took office on April 25, 2016, for his second interim presidency. His generosity in doing so earned the gratitude of the entire Cornell community.

Rawlings continued and expanded upon President Garrett’s emphasis on closer collaboration and integration of the Ithaca campus with university endeavors in New York City, chiefly Cornell Tech and Weill Cornell Medicine. Highlighting the value of Cornell’s distinctive position as an institution bridging upstate and downstate New York, he promoted research and teaching collaborations among the campuses. For Cornell Tech and Ithaca in particular, he initiated the “hinge project,” a fund providing incentives and seed money for Ithaca faculty to teach and conduct research at Cornell Tech, where appropriate to Cornell Tech’s mission of external engagement.

In Ithaca, he spearheaded a process of curriculum review by the faculty, emphasizing the value of a liberal education. The College of Arts and Sciences, which offers core courses that other colleges rely on, was well underway with its review before Rawlings’s interim term ended.

Under Rawlings’s leadership Cornell received the largest gift to the Ithaca campus in its history: $150 million from Trustee Emeritus Fisk Johnson and the SC Johnson company, naming the Cornell SC Johnson College of Business. The gift was seen as transformative for the college, which had been created in 2015 by linking the Charles H. Dyson School of Applied Economics and Management, the School of Hotel Administration, and the Samuel Curtis Johnson Graduate School of Management.

Rawlings spoke out effectively for Cornell on issues of nationwide concern following the election of Donald Trump to the U.S. presidency in November 2016.  On November 22, he issued a statement reaffirming the core principle of “any person, any study,” assuring students registered under the Deferred Action for Childhood Arrivals program of the university’s support in a climate of uncertainty for immigrants.

In January 2017, following Trump’s executive order restricting entry to the United States from seven predominantly Muslim countries, Rawlings spoke out against the order, offering assistance to students, faculty, and staff who could be affected and reiterating the university’s principles of diversity and inclusion. In February, Cornell joined 16 other colleges and universities in an amicus brief supporting a case in a federal district court challenging the executive order.

Having steered the university effectively through a difficult period of transition, Rawlings concluded his third term of extraordinary service to Cornell when Martha E. Pollack became president on April 17, 2017.