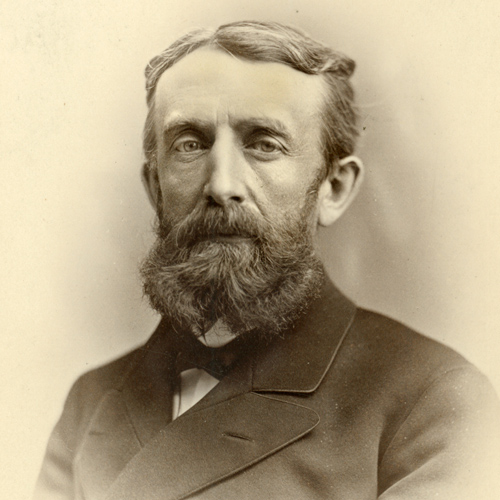 A radical idea in American education was born when Andrew Dickson White and Ezra Cornell crossed paths in the New York State Senate. White was a worldly intellectual whose dream was to create a “truly great University” that would “afford an asylum for Science—where truth shall be taught for truth’s sake …” He and Cornell, a farmer and inventor who made his fortune developing the telegraph system with Samuel F. B. Morse and Hiram Sibley, agreed the new institution would be nonsectarian, a controversial stance for the time.

White and Cornell successfully politicked to obtain the benefits of the Morrill Land Grant Act of 1862 for their new university. On February 7, 1865, White introduced into the state senate a bill that established Cornell University as an institution for “the cultivation of the arts and sciences and of literature, and the instruction in agriculture, the mechanic arts and military tactics, and in all knowledge.” Governor Reuben E. Fenton signed the bill that constitutes Cornell’s charter two months later on April 27.

White was largely responsible for recruiting faculty to come to the new institution, and as president, he was instrumental in the development of the university’s library and its other collections by his own purchases and through encouraging the gifts of others. He traveled in Europe to purchase collections and to learn about the newest innovations in technical education. He initiated other educational developments. He suggested the establishment of mechanical laboratories and workshops for the Department of Mechanical Engineering and bought the first piece of equipment, a power lathe. He promoted the first Department of Electrical Engineering in the United States, taught and encouraged historical studies, and founded the Department of Political Science “for practical training.”

Born in 1832 in Homer, New York, White attended Geneva (later to become Hobart) College and then graduated from Yale University. He was elected to the New York State Senate in January 1864.

After White resigned the presidency in 1885, he continued to live in Ithaca until his death in 1918. His influence on the development of the university he helped establish continued throughout his life and the university’s history. He died in Ithaca on November 4, 1918.