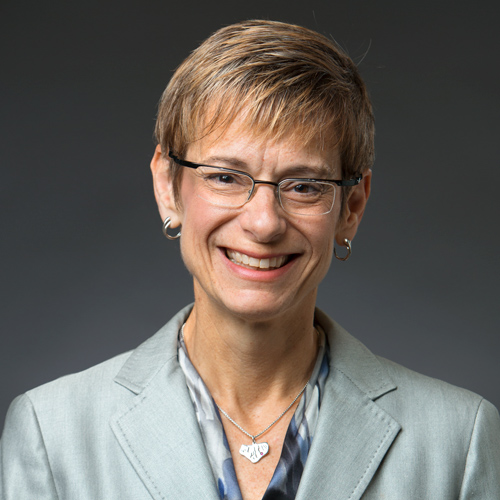 Elizabeth Garrett served as the 13th president of Cornell University for eight months before her untimely death from colon cancer in March 2016, and her brief presidency was marked by bold initiatives and the invigoration of standards of excellence across the university. As the first woman president in Cornell history, she was an inspiration to many on campus and beyond.

One of her first initiatives was to ask all colleges and units to examine procedures with the goal of reducing unnecessary bureaucracy and improving efficiency; from the many suggestions received, several ideas were chosen for implementation. Garrett also encouraged and provided funding for new forms of collaboration between Cornell Tech and the colleges in Ithaca—one of the major goals outlined in her inaugural address.

Perhaps most significantly, Garrett and Provost Michael I. Kotlikoff, with trustee approval, announced that Cornell would create an integrated College of Business, composed of the School of Hotel Administration, the Charles H. Dyson School of Applied Economics and Management, and the Samuel Curtis Johnson Graduate School of Management. All three are expected to benefit from greater coordination, reduced duplication of efforts, and the impact of greater scope and scale. The university established a process by which the three schools’ faculty and leadership, with alumni, student and staff input, would determine academic processes and governance as well as details of operation.

Garrett oversaw the conclusion, at the end of 2015, of Cornell’s most successful capital campaign to date, totaling $6.3 billion. She created new momentum early in 2016 by announcing the first major post-campaign gift, a $50 million endowment for the Robert Frederick Smith School of Chemical and Biomolecular Engineering and for scholarships. She also made key decisions regarding construction and financing of the Roosevelt Island campus.

Garrett, who held faculty appointments in the Law School, the Department of Government in the College of Arts and Sciences, and the Samuel Curtis Johnson Graduate School of Management, was a distinguished legal scholar with a record of public service. She came to Cornell from the University of Southern California, where she was provost and senior vice president for academic affairs from 2010 to 2014. A superb administrator, she oversaw the USC Dornsife College of Letters, Arts and Sciences, as well as the Keck School of Medicine of USC and 16 other professional schools.

Strongly committed to public service, Garrett was appointed in 2005 by President George W. Bush to a nine-member bipartisan Tax Reform Panel. From 2009 to 2013 she was one of five commissioners on the California Fair Political Practices Commission.

Garrett’s primary scholarly interests were legislative process, the initiative and referendum process, the federal budget process, the design of democratic institutions and tax policy. She was co-author of the fifth edition of the leading casebook on legislation and statutory interpretation, Cases and Materials on Legislation: Statutes and the Creation of Public Policy (2014).

Before joining USC, Garrett was a professor of law at the University of Chicago and also served as deputy dean for academic affairs. Earlier, she was a legal advisor at the Iran–United States Claims Tribunal at The Hague and legislative director and tax and budget counsel for Senator David L. Boren (D-OK).

Garrett was a Phi Beta Kappa graduate of the University of Oklahoma, where she earned a B.A. in history with special distinction in 1985. She received her J.D. in 1988 from the University of Virginia School of Law, where she was chosen for Order of the Coif. She clerked for Justice Thurgood Marshall on the U.S. Supreme Court and Judge Stephen Williams on the federal court of appeals for the District of Columbia.